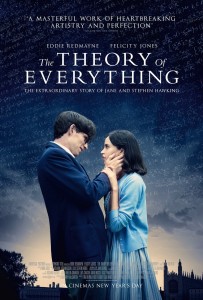 Stephen Hawking: There should be no boundaries to human endeavor. We are all different. However bad life may seem, there is always something you can do, and succeed at. While there’s life, there is hope.

Synopsis: The story of physician Stephen Hawking and his wife Jane.

The Theory of Everything is an above average biopic which unfortunately doesn’t rise above its strong subject matter. The problem with biopics is that they end up being clips of important parts of a famous person’s life. Biopics such as A Beautiful Mind and The Aviator although have strong performances from its lead actors only skim the surface of powerful lives. Films such as The Social Network and Schindler’s List provide an accurate take of a part of that person’s life (possibly the most important part). The Theory of Everything unfortunately falls into the former category by trying to fit in twenty or more years into a two hour frame. Therefore we don’t quite get into Hawking’s theories or how he came to them (except for clumsy scenes depicting a look into a fireplace birthing his theory of the black hole). Where the film succeeds is in its extraordinary performances. Eddie Redmayne’s performance of Hawking captures the physicality and heart of a man paralysed by ALS. His performance never feels false and this is quite an achievement to capture the speech and physical bodily tension of Hawking over the years as his body slowly degenerates. Felicity Jones also excels as his wife Jane. She could have played it as the sad wife constantly trying to help however Jones fills Jane with a strong spirit and a will all her own as she tries to find her own identity as a wife of not only a successful and popular physicist but also a man whose body is failing him. Also she must take care of her children and find time for herself to finish her own studies. It is a powerful and heartbreaking story which elevates this biopic to something greater. 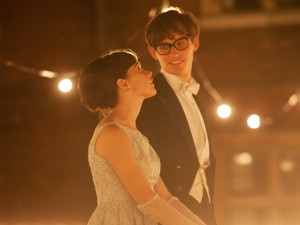 The film is visually striking and captures its time quite perfectly. Overall a better than average biopic which often falls into the pitfalls of telling a vast story in two hours but the lead performances make it memorable.